Signs and Symptoms | Treatment | In Maricopa County | Prevention | Resources | Fact Sheet (PDF)
Rocky Mountain Spotted Fever (RMSF) is a disease caused by the bacteria Rickettsia rickettsii. The bacteria are transmitted to humans through the bite of an infected tick, most commonly the American dog tick (Dermacentor variabilis) or Rocky Mountain wood tick (Dermacentor andersoni). The disease was first recognized in the Rocky Mountain area, however, despite the disease's name, relatively few cases occur in the Rocky Mountain west. Most cases of RMSF occur in the Southeast and South central regions of the United States between the months of April and August, but in Arizona tick activity has been seen from March to September. RMSF used to be a rare disease in Arizona, however, it has become increasingly common over the last several years. Between 2003 and 2012, over 250 cases and 19 fatalities occurred, almost all of these cases occurred in areas with large amounts of free-roaming dogs and severe tick infestations, including six Tribal Lands. During 2010-2011, RMSF in Arizona occurred at a rate ~200 times the national average. RMSF can be rapidly fatal if not treated within the first 5 days of symptoms. Before tetracycline antibiotics were available, case fatality rates ranged from 20-80%. 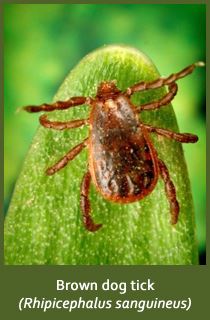 
Symptoms usually present in 2-14 days usually with a sudden onset of moderate to high fever, significant malaise, deep muscle pain, severe headache, chills and conjunctival infection. The "typical" triad of fever, rash, and tick bite are only presented between 21-40% of the time. Clinical signs and symptoms include:
Maculopapular Rash
Petechial Rash


Confirmation of the diagnosis is based on laboratory testing, but antibiotic therapy should not be delayed in a patient with a suggestive clinical presentation. Antibiotics are less likely to prevent fatal outcome from RMSF if started after day 5 of symptoms.

Antibodies
Antibodies to R. rickettsii are detectable 7-10 days after illness onset. The gold-standard serologic test looks for a four-fold change in antibody titers using immunofluorescence assay (IFA) on paired samples. The first sample should be taken within the first week of illness and the second should be taken 2 to 4 weeks later.
Note: IgM antibodies are less specific than IgG antibodies and are more likely to generate false positives. IgM results alone should not be used for laboratory diagnosis.

Note: Antibody titers are frequently negative in the first 7-10 days of illness, thus serologic tests may be falsely negative during this time period. For accurate testing of suspect cases an acute and convalescent serum are necessary.


Doxycycline is the first line treatment for adults and children of all ages and should be initiated immediately whenever RMSF is suspected. Use of antibiotics other than doxycycline is associated with a higher risk of fatal outcome. Treatment is most effective at preventing death if doxycycline is started in the first 5 days of symptoms. Therefore, treatment must be based on clinical suspicion alone and should always begin before laboratory results return or symptoms of severe disease, such as petechiae, develop.


Although RMSF is not present in Maricopa County, there are still cases in residents who have traveled to endemic areas (both within and outside of the state) or moved from an endemic area. From 2006-2011 there were 56 cases investigated within Maricopa County. Of those investigated, one patient was a suspect case, four patients were probable cases, and one patient was confirmed for RMSF.

These classifications are for surveillance only and are not used for diagnostic purposes.

Note: These data are based on Arizona diseases surveillance data.


Reducing exposure to ticks is the best defense against RMSF and other tick-borne infections. There are several approaches you and your family can use to prevent and control RMSF: